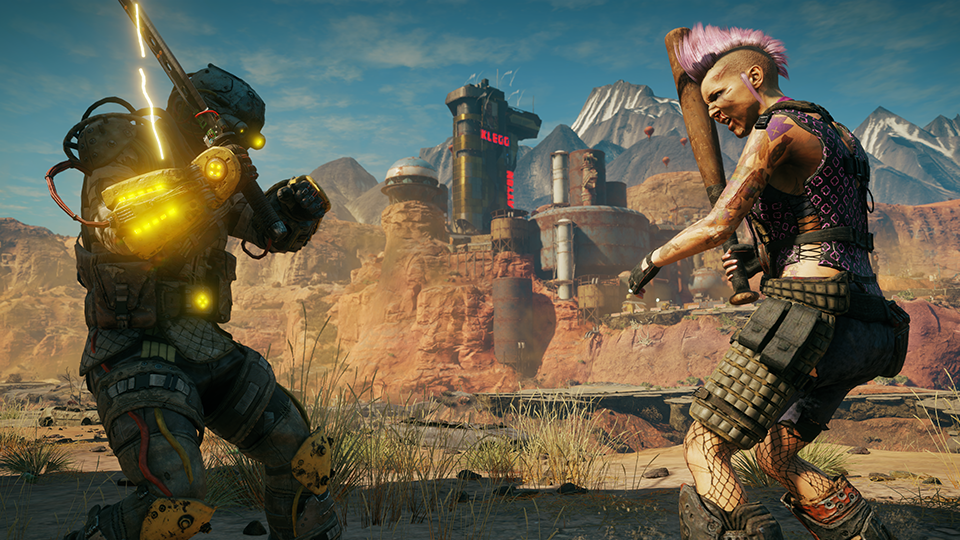 Remember the old toy, “Cool Sam”? “And Doom?” You know what genre of games I’m hinting at? Great, but where does Rage 2 come from? The same post apocalypse, cars, raiders and all that? Right! Now imagine.

We take a blender, throw in all games with sharp and dynamic shootouts, a wasteland with cleansing territories, a huge, atmospheric world and tough races, mix well and get “Rage 2” at the exit! A very bloody and tough action game in the pleasant sense of the word.

If we talk about the plot…

Rage 2 focuses on the battle system and the vast open world that you can explore. And do not forget about cars. Still, you have to travel the world on them.

What do you have to do? Ride around the map, complete missions, defend, fight, upgrade guns, upgrade your character’s abilities and wheelbarrow. Do not even think that it is boring! This is a real action game with a wide range of weapons, abilities and trips through the wasteland.

Rage 2, suitable for those who love action, races and shootouts, there is something to do and with whom to fight!

Since Half-life 2 introduced drivable vehicles into shooter games, cars were basically just an interesting way of getting over long distances. Again, RAGE was sensitive to this.

The first RAGE game was a pretty big deal back in 2010 even if the story hardly brought anything new to the genre. RAGE was released during the ‘Crysis era’ when first-person shooters were at the forefront of graphical experimentation. Let’s face it, you just played Rage mostly to see John Carmack’s fancy new ‘Mega Texture’ tech in action.

The first RAGE plunged the player into a bleak world filled with mutants and garage bandits fighting for survival in the aftermath of a cataclysmic asteroid strike (rather than a nuclear winter you see often nowadays). RAGE 2 plays out within this same setting, but takes place 30 years later in a civilisation that has risen from the ashes, and is no longer trying to get by on scraps of resources.

Players will thus enter a world in which the Arks – subterranean pods preserving life on earth – have been reactivated and a new world is beginning to emerge. Unfortunately, a formidable faction seen in the first game – The Authority – has proclaimed themselves the leaders of this new Earth. Rather than earn their leadership, they have used a series of bloody wars to obliterate anyone standing between them and their authoritarian regime.

The only opposition that once proved a match for The Authority are a division of technologically-enhanced mercenaries called rangers. You play as either a male or female version of the last, surviving ranger named Walker (I can neither confirm nor deny if this is some kind of Chuck Norris reference).

The campaign is subsequently centred on Walker’s exploits as he/she starts a contingency plan against The Authority named ‘Operation Dagger’. You do this by shooting, blowing up, eradicating and driving over anything they deem even mildly important…